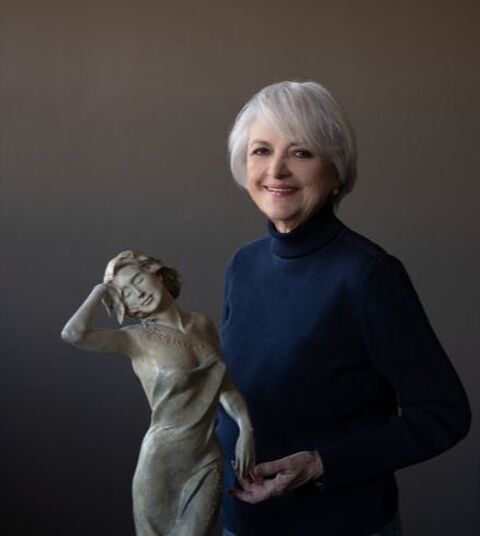 Moana Ponder expresses her artistic vision in classic fine art bronze with  emphasis  on the female figure.  Raised in a family of artists she learned the language  of  visual  art from childhood.  Her love of dance and the environment have  frequently  influenced  her choice of subject matter.  She often personifies elements  of nature such as the  sea and butterflies into graceful  forms that are both elegant  and alive.  Other work  springs from an inner landscape, one of the mind.  Some  pieces are  introspective  while others reach out  to the infinite.  Whatever the  subject, there is  an attention to  lyrical line and rhythmic movement that delights  the eye.
Born in Hawaii she was educated at Punahou School and then the University of  California at Berkeley. Specific study was under Edy Burke, Tyler Norman,  Fritz White and others as well as  study at the Honolulu Academy of Arts.  Time spent in Italy and France also greatly influenced her work.
Originally a painter,  she took up sculpture in 1995 and enjoyed a rapid rise to national attention.  In just the first few years  of work as a sculptor her work was exhibited at Chamizal National Memorial in El Paso, Texas  and the National Sculpture Society Awards Exhibit at Brookgreen Gardens in South Carolina and at Park Avenue in New York. Her work has since been exhibited in fine galleries from coast to coast and is collected both nationally and internationally.

BRONZE PRODUCTION............
People often ask how long it takes to make a sculpture.  It all starts with an idea.  Moana says, "Sometimes the idea may simmer on the back burner of my mind for years.  Other times the thing comes to me whole in an instant.  Many times the hardest work goes on in my head before I even touch the clay." Once the concept is firmly in mind,  a sketch is made in wax to work out the design in three dimensions. Sometimes these little sketches are so pleasing and dynamic that they can be cast as pieces in their own right. But more often they are enlarged and the idea refined in clay.  Things don't always go smoothly.  Many a piece seems to have a will of it's own and seems to resist the will of the artist,  but eventually everything comes together and the actual creation of the original art work is done.  Once the clay is complete, what is known as the lost wax process begins. We will follow the journey with the casting of Flight of the Nightbird.

First it goes to a mold maker.  He determines where it will need to be cut for casting and coats the various areas with a rubber or silicone mold material.  When it is finished, then a plaster mother mold is applied to the outside of that to preserve the shape of the piece when the clay is removed.  After it is put back together without the clay, it progresses in it's journey to someone who will pour wax in the cavity to a thickness of about 3/16th of an inch.  When cool and removed from the mold the various wax pieces are chased to the original finish.  All air bubbles and other irregularities are repaired to duplicate the original.

When the wax has been chased it will next receive a series of gates, or sprue that will act as conduits for the exit of the wax and the entry of molten bronze and exit of air when the metal is poured into the ceramic shell that will be built up on the wax.     The next photos show wax chasing, sprue and the building up of the ceramic shell.

The shell is build layer by layer into the final mold that will receive the hot metal.  When all the pieces have been finished, the next step is to burn out the wax from the shell and heat it preparatory to the metal pour.

Bronze ingots are heated in a crucible to about 1950 degrees F and then poured into the hot ceramic molds which have been placed in a bed of sand with the pour holes ready to receive the molten metal.  Once the casting has cooled, the ceramic shell is broken off and the sprue is removed before it is sandblasted to reveal the bronze. 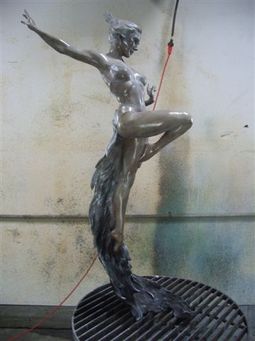 Then all the various pieces can then be welded together and the seams chased in metal shop. Once the piece is whole again and the metal chasing finished, it is ready for the patina shop.
​
​ The step of finishing the surface of the metal with a patina requires much skill and artistry.  The metal is heated and treated with various chemicals using a variety of techniques to achieve the final effect desired by the artist.  Lastly the piece is mounted on the appropriate base chosen by the artist to complement the piece and the long process is complete. Now the piece is ready to find it's way into the home or place of business of a collector.

This brief summary just gives one a glimpse into the world of bronze production.  It is a world peopled with artists and artisans dedicated to producing  beautiful works of art that are in one of the most durable and lasting of mediums.  The life of a painting can be measured in centuries, but the life of a bronze can extend for thousands of years.